Having been postponed due to snow from before Christmas all eyes are on St. Anne’s Hall, Ballylinan this Monday and Tuesday Mar.14th and 15th for the staging of “Jack and the Beanstalk” by the children of Ballylinan N.S.

With a cast of 242(+1 adult) the children range in age from 5-13 years. For producer Bernie Dunne and her team of Ann Sourke, Suzanne Farrell, Paul Hickey and Michael Byrne this is the 7th consecutive year of children’s panto in Ballylinan starting with Pinnochio way back in 2004! The production receives wonderful local support and is a real “community event”. As is tradition the acting parts are played by the children from 6th class guided by their teacher Aileen Brennan and for the first time ever are joined by an adult, Michael Sourke as “The Giant” who is no stranger to panto(and Passion Play)!. All the other children join in at different stages with their own musical contribution so a night of top class entertainment is guaranteed!

Tickets are sold out for both performances but for these children it may be the start of a career “on the boards”!!

END_OF_DOCUMENT_TOKEN_TO_BE_REPLACED 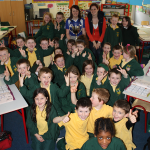 Past pupil Chloe Ryan visited the school with the County Minor Cup which was won recently by Ballylinan/Killeen ladies football team.